It occurred to me this week that pacing and energy management with ME isn’t a natural thing to do. There isn’t some ingrained evolutionarily mechanism which sets off a big alarm and flashing red light in our head saying “you’ve done enough for today”. It’s a weird life skill most never need to consider. For most, If they need to do stuff, they eat healthily and exercise and generally their body allows them to do the things they need to do. Without getting into the mind/body connection discussion, we were made to develop in order to perform rather impressive feats.

Yet here we are, somehow having to decide how to use our ‘spoons’: or energy allowance for the day. It’s like those of us with ME are on some sort of rationing system because the universe forgot we’re no longer at an intergalactic energy war.

I’ve now been living with ME for the second time, for just over 18 months. This week I’ve had perhaps the ‘best’ week I’ve had since I became ill. It has also coincided with us moving house. I’ve been carrying boxes, putting up curtains and doing blokey things. Have I paced myself? Not really, even though I’ve maintained my strict afternoon rest schedule, I know I’ve been doing too much. On the whole, the constant ache hasn’t been there, the brain fog is reduced and I’ve had a spring in my step. The best thing has been having the ability to enjoy interactions with my kids rather than me being irritated by them due to exhaustion. My mother in law has been staying and (I don’t think she’ll read this!) I think it’s fair to say we’ve really enjoyed each other’s company!

So no, we don’t have this internal ability to regulate our energy output without strict enforced religious-levels of observance. I had seven years of learning the art as an adolescent, but I certainly was nowhere near mastering the discipline then.

The best way I’ve found to keep on top of reducing my activity levels when I have energy? Other people. I don’t yet have the self discipline to slow myself down. Talking with my therapist has been useful as I’ve discovered that I have the personality type where I feel the need to give of myself. So if I can’t give out to others, when I suddenly have energy, I’m pushing too hard too soon. I suspect a lot of people with ME have a similar personality type.

I’m fortunate to have family around who know how this all works. Even my kids understand the output/punishment formula and will caution me. I slung an old electric radiator from prehistoric times into a skip the other day and unfortunately for me, both my mum and mother-in-law saw and I was severely reprimanded! Even though I know this cause and effect system inside out, of exertion and exhaustion, those around me are able to more effectively step back and see the ultimate consequences of my actions while I’m happily running on the fumes of adrenalin.

I know so many Spoonies don’t have a close physical support system. If you don’t, I’d urge you to use social media to make connections and allow the spooniehood to keep you accountable. We’re all part of one big ‘Energy Addicts’ community. During this past week I explained on twitter that I’d had an upsurge in energy and that we were also moving into the farmhouse where I grew up. I asked people to tell me to slow down. A lot of people responded and I felt genuinely supported. Some even tweeted me randomly during the week asking if I was doing too much! I’d like to thank everyone who tried to keep me in check. I know there’s been times when I could have pushed myself further but didn’t. Sometimes I got the balance right but often I didn’t.

If like me you’re an Energy Addict, please listen to your body, plan your day or week, give yourself alloted rest times and keep to them, even if you’re feeling OK(ish) and try to do a bit less than planned if you know you’ve been too ambitious. If those around you understand and know you’re on an energy binge, stop and listen to them, they probably care about you!

As for expecting a crash that may or may not come and wondering how long this is going to last, I guess that’s for another blog, all I’ll say is, optimism seems to be a currency we spoonies can’t afford. The exchange rate is too damaging to our energy pockets. If we’re not careful though, all we’re left with is pessimism. There must be a middle ground, where our spiritual and emotional reality can rest.

Picture of footbridge over the Thames with St Paul’s Cathedral in the background and various groups of people walking over the bridge. The sky is full of grey clouds. I took this picture when I visited London with my daughter in summer 2017 before I became ill. We enjoyed visiting the Tate Modern and St Paul’s. 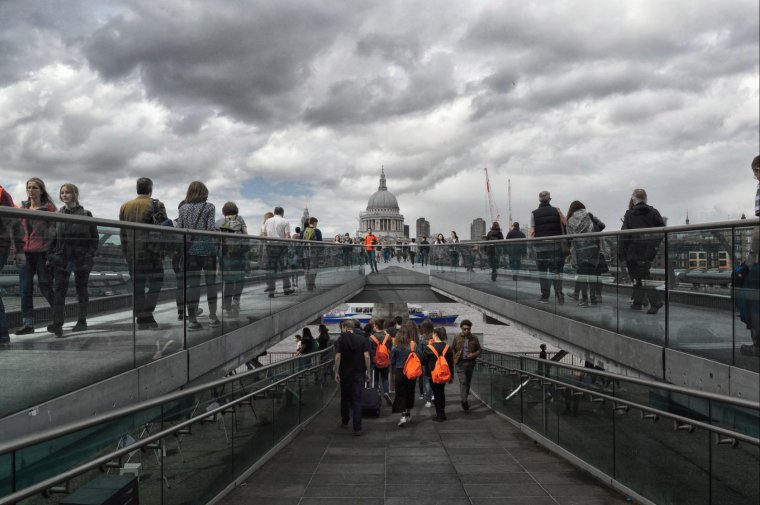